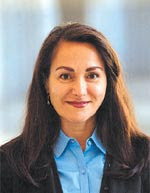 Valerie Moghadam served from 2004-2006 as Chief of the Section on Gender Equality and Development in the Social and Human Sciences Sector of UNESCO, in Paris, France. Val is now Professor of Sociology and Director of Women's Studies at Purdue University, West Lafayette, Indiana, USA. Photo Credit: webislam.com

Excerpt from UNESCO's Gender History concerning the 1960s: "One important initiative was the Pilot Project for Equal Access of Women and Girls to Education, launched by UNESCO with the Government of Upper Volta (the country later was renamed Burkina Faso). Dr. Brenda Gael McSweeney wrote her Ph.D. thesis on this particular project.  She explains that the initiative was unique in its multi-faceted, multi-site orientation, and in its duration. In-depth sociological studies were undertaken in three zones of the country, inhabited by ethnic groups with vastly different cultural traditions.   As a result of these studies, the Project decided to give first priority to the introduction of workload-lightening technologies, with the aim of reducing some of women's and girls' daily drudgery to free time and personal energy for education and other activities. The Project was planned from the outset for a ten-year time period to allow for behavioral change and the sharing of lessons within Burkina Faso and also with neighboring countries.  Dr. McSweeney elaborates:

'Led by the charismatic National Coordinator Scholastique Kompaoré in the 1970s, the Project achieved notable successes.  It engaged women in articulating their viewpoints; it led to women adopting the practical health advice conveyed to them by Project radio and functional literacy programmes in national languages; and it unleashed time for a myriad of income-generating activities.  The Government and UNESCO's development partners took note of these achievements, which led to expansion and replication of the project by the UN Development Programme, the World Bank, the US Agency for International Development, other donors and Non-Governmental Organizations.
A 2005 assessment of the legacy of this innovative effort indicates that the progressive polices introduced over three decades ago by the Government in partnership with UNESCO have been followed and built upon by successive national political leaders and development organizations.  The Government of Burkina now allocates 22% of its national budget to education, a higher percentage than most African countries.  While female literacy (age 15 and over) is low at about 9%, eight girls now complete primary school for every ten boys.  The assessment suggests that while labor-saving devices have reduced the time women spend on subsistence activities, their workloads remain daunting as the women now spend their freed-up time on activities that give them discretionary income.  The Government is also maintaining a focus on women's workloads.  A current high-profile initiative is the introduction of the 'Multi-Function Platform' that will provide energy to villages for grinding millet, processing shea butter and drying vegetables, and also will provide light for children to study by.  It is noteworthy that behavior change generated by the Project also continues, as women in the Project zones now tend to be consulted on important family and community decisions.
In addition to the specific initiatives noted above, the mission of the Project continues to be endorsed.  The flagship joint programme of the UN organizations in Burkina is directed at girls' education.  Another "child" of the Project is the International Centre for Girls' and Women's Education in Africa headquartered in Ouagadougou that promotes women's and girls' full participation in poverty eradication. The UN Millennium Development Goals reflect these themes, and the Project directions still serve as a beacon for the empowerment of women and girls.' " [1]
[1] Personal communication from Dr. Brenda Gael McSweeney, Visiting Scholar, Women's Studies Research Center, Brandeis University and Visiting Faculty, Women's Studies Program, Boston University.  Dr. McSweeney served with the UN Development Programme from 1972-77, based in Ouagadougou.  See also her PhD. thesis, based on this UNESCO Project, at gaels.net. The statistical data are drawn from Education for All in Africa:  Paving the Way for Action (UNESCO Regional Office in Dakar , 2005).
Posted by Brenda Gael McSweeney at 2:06 PM