Hot off the Press: New Publication in Moore!

We're delighted to share that thanks to John Hutchison, Professor Emeritus at Boston University's African Studies Center, and his colleague, writer and publisher Adama Jacques Sibalo of Burkina Faso, a first publication in Moore on women's empowerment in Burkina is available in our UNESCO/UNITWIN collection! Moore is an official language in Burkina Faso, and Adama has published a series of books in Moore since 2002. The article that he translated in June 2015 is "Burkina's Women Shape Progress" by Brenda Gael McSweeney and Scholastique Kompaoré (the French version called Les femmes du Burkina façonnent le progrès was translated from the English by Tshali Kabanga Charlie).

Here's the link to the publication in Moore, translated by Adama Jacques Sibalo:
http://brendamcsweeney.com/wp-content/uploads/2015/06/Burkina-Pagba.pdf

Adama's own journey is a fascinating one: below is a feature on him that appears in The African Language Materials Archive (ALMA) at Michigan State University, of which John Hutchison is Coordinator.

"Adama Jacques Sibalo was born in 1975 in the Sissilé Department of Kiembara in the province of Sourou in Burkina Faso. He did not get the chance to attend school. From 1985-87 he benefited from a literacy course in his maternal language, Moore, in Kiembara. Later he took a literacy course in French in Zaba and in Tougan in the province of Sourou. He later attended primary school in Kiembara and obtained his Certificate of Elementary Primary Studies in two years. Then he spent two years in the Private College Apolline KY of Tougan. Lacking the means and without support, he abandoned school in 1994 and went to Ouagadougou. In love with his maternal language, empassioned by culture, and full of compassion for those who are illiterate, he taught himself further. In 2002 he published his first book intitled : Tõnd zabrã ka be ne ninsaal ye. Then in 2006 he published Mam ba yir soalma, and then in 2008 his book entitled Soalmâ kôta yam." From http://alma.matrix.msu.edu/

Strengthened by all of these experiences, Adama decided to commit himself to producing literature in the French language to benefit Burkinabe culture. His recent works include several collections of Burkinabe stories and legends called "Moonlight" and a volume entitled "The Good Choice." 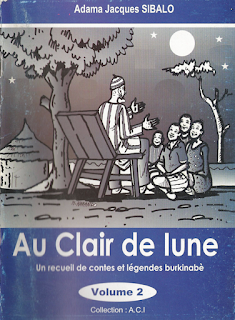 Dr. Carrie Preston and Dr. Brenda Gael McSweeney, Co-Coordinators of the UNESCO/UNITWIN Network on Gender, Culture & Development headquartered at Boston University, are thrilled to announce this additional interdisciplinary dimension of their collaboration, since this inaugural publication in Moore brings together BU's Women's & Gender Studies, BU's African Studies, Michigan State University's focus on "literature and literacy in the languages of Africa", and notably the special talents of Adama Jacques Sibalo of Burkina Faso.

Posted by Brenda Gael McSweeney at 9:46 AM